Assinter, the major interlocutor for the national digital transformation

Assinter, the major interlocutor for the national digital transformation 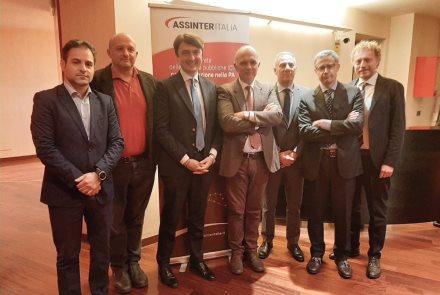 The Assembly of the Assinter Members took place in Rome on November 22nd, inaugurating a new season for the governance of the Association; the Assembly appointed Francesco Ferri - currently President of the in-house club ARIA S.p.A. - as the new President, and elected the team he proposed in the Executive Committee to lead the network for the next two years. The President will be supported by a team of Vice-Presidents/Councillors who will provide their experience and specific know-how on strategic issues. Two are the reconfirmations: Maurizio Stumbo, CIO of LazioCrea, delegate on Ecosystem digital payments and technologies for culture, and Gianluca Mazzini, DG of Lepida, who will continue to lead the associative action on Infrastructures and National Strategic Poles; in addition, Paolo Piccini, Sole Administrator of Liguria Digitale will be in charge of Relations with AgID and Cybersecurity, and Dario Colombo, DG of Sicilia Digitale, will bring the voice of the southern territories, deepening the strategic issues for the relaunch of the South, connected to the funds for innovation and the new programming.

The association must play a key role in the definition and implementation of digital policies, Assinter members claim, as it represents the point of contact between central institutions and individual territories. A role that is even more central today, in the light of the persistent distance between the levels of digitization in the national context. New objectives, important challenges, hence an approach that also involves the internal organizational structure with important innovations. "Assinter represents a network serving the country's innovation, qualifying itself as an active part for its shareholders and stakeholders in data management, to the benefit of the country. In the next two years Assinter must aim at strengthening its political relevance, becoming the natural interlocutor of the institutions for digital transformation in Italy" - said President Ferri.